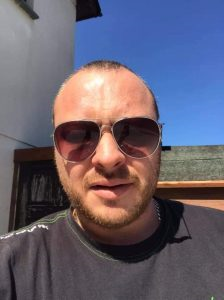 My name is Darren. A lot of people will know me by my last name Delgado.

I just wanted to share with you the story of the mental health issues I had in the past. Just in case someone reads this and can relate. And hopefully, then you know you’re not alone.

Well, 12 years ago I was diagnosed with psychosis; a mental health condition, which for me was drug-induced psychosis. It is an illness where you hear voices in your head, and they can get so vibrant that they even sound so loud you can hear them outside your own personal headspace. Also, you can get so bad that you see things as well. They are not there, but they were for me and nobody else could see or hear what I was experiencing.

Although my family were trying to convince me that it was all in my head, the only person I trusted was myself as I was the only one experiencing these symptoms. I fully believed that what I was going through was real, so I was put on to medication to help me. Which I was so grateful for. But I still had a drug addiction.

Now you would have thought that I would have given up the drugs a long time ago, for my own wellbeing but this wasn’t the case. I was addicted and although the medication was keeping me well, all it was doing was counteracting for the recreational drugs I was taking. Which really was a waste of time.

Although I used to give up recreational drugs while I was recovering from psychosis, as soon as I was well again, I hit the recreational drugs again thinking I’m cured, and it won’t come back. But I was wrong. It soon comes back tenfold. Which then led to schizophrenia. I lost my job as a lorry driver and then my car license. I lost my independence and then it was time.

4 years ago, I decided to give up the recreational drugs and it was the best thing I ever did. Once I had given up, I came back to reality. I’m still taking medication every day. As time went on, I felt I could stop taking my medication, which I haven’t taken any for a good few months. And I’m still free of psychosis. I feel now that I can recognise the symptoms before its too late and not go tumbling back down the rabbit hole.

The thing with psychosis; it all feels so real but in fact, it’s not reality. But until you stop and bring yourself back to reality, you won’t know the difference.

I just want to say always trust your loved ones. As they have your best interests at heart. It was a long haul to get to where I am now. If it wasn’t for music that I could concentrate upon and keep my mind occupied, I don’t think I would have been here today. I’m incredibly grateful to be back on the “reality road” again. I hope this might help someone as I wouldn’t wish it upon anyone. Seriously though, please reach out and talk to someone, as what you’re thinking is a massive problem could only be a minor issue that is really not worth you stressing yourself over for days on end.

Love you all, reach out and peace.

Your ticket for the: My Story – Darren